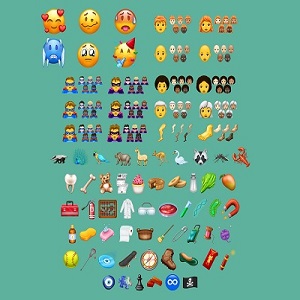 Emoji-lovers will be happy to learn that no fewer than 157 brand new emojis are due for release later this year. New emojis will include redheads, a cupcake, a female superhero and a pirate flag, to name but a few.

The newest emojis set to hit screens during August / September 2018 were already previewed in 2017 and has now been officially published by the Unicode Consortium.

The new release will be launched as Version 11.0, or Emoji 11.0, which is quite a jump in numbering from the present Emoji 5.0. Unlike the normal swing of things with many Windows and Apple releases, where its commonplace for numbering to skip a few beats, the numbering system actually serves to bring the new Emojis in line with the Unicode Standard system’s current numbering run.

Unicode is already accepting submissions for next year’s release, which will be released as Emoji 12.0. The deadline for submissions for next year’s run was March of this year. Unicode confirmed that the new list of emojis set for release during August or September of this year is fixed and no further submissions will be accepted. The process allows vendors to start working on the pre-release as well as the fonts and design well ahead of the emojis going live.

Emojis are also going full-on inclusive going forward, as far as skin tones as well as gender equality are concerned. The male and female emojis now sport a host of new hairstyles and types, including bald, curly haired, redheads as well as white-haired. The superhero and super villain emojis can now be made to do their thing in various skin tones, as can the leg and feet emojis.

The new additions will put the total number of emojis to be used and enjoyed going forward at a whopping 2,823, but so far, unless you count the dice and slots, there are few that relate to gambling, so many are hoping that next years additions add some themed options to the mix too.

Whilst emojis like knitting emojis and peacock emojis definitely add a new dynamic to the available options, there is one group that has taken to social media pages to express their glee and absolute excitement in a very prominent way. The redheads. Famous Modern Family actor Jessy Tyler Ferguson seemed especially happy at the release of redheads in Emoji world, thanking the emoji gods for the favour of inclusion.

Concerns were however voiced over the particular shade of red that was used in the representation of the redheads. One user complained that the colour that has been employed to depict redheads in emoji land closely resembled that of spaghetti in a can.

The data was gleaned from Apple’s Differential Privacy overview and indicates that the LOL emoji is the overall winner by an absolute landslide among English-speaking Americans.

Next in the popularity order are the red heart, the crying face, the in love face, the kissing face, the rolling eyes face, the skull, the blushing smiley face, the despairing face and the hmm (thinking) face. Eight of the top ten faces may be smiley faces, but this may change after the release of emoji 11.0.

Interestingly enough, given the fact that we have so many emojis available at the tips of our fingers, human emojis still occupy top order as far as popularity goes.

No wonder the gingers are excited at finally being represented in a proper and befitting manner.