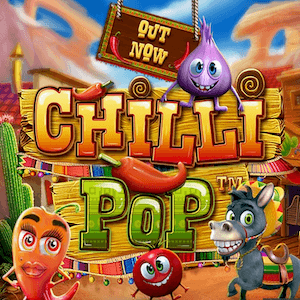 Betsoft’s latest video slot, ChilliPop has gone live, and is expected to be a great hit. The game is set against a Mexican town backdrop and is all about mixing your salsa ingredients just right to land a win big.

ChilliPop is a standard 5-reel 3-row game, but it has a few spicy additions. The symbols are the main salsa ingredients of tomatoes, sweet peppers, onions, garlic, and chillies, and are joined by a Mexican donkey with a giant smile, and colourful piñatas that act as Wilds. The Wild piñata also contain multipliers, and for each one on the reel the multiplier increases, starting with 1 x for one piñata, 2 x for two piñatas, and so on, in a stacked multiplier style.

The really spicy addition however is the free spins feature. To access it players need to land 3 pack mules on a single spin. The mule’s launch the expanding reels feature where the more mules’ players collect, the more reels appear. Players can eventually accumulate 8-reels with 8-rows, which offer even more paylines and winning opportunities. All through the game, a traditional mariachi band accompanies the action, picking up in tempo to add to the excitement.

A Slot for Everyone To Enjoy

BetSoft’s Marketing Director, Annamaria Anastasi said the company’s goal was to create a slot that had something all players could enjoy. They wanted a lively captivating theme, which was accessible without sacrificing win potential. From ChilliPop stacked multipliers to its Free Fall feature, Anastasi believes all players will be satisfied.

The new release is available on desktop, iOS and Android.

BetSoft Gaming is known for its high-end slots and they have also created several 3D titles to date. In addition, players can also enjoy table games, Video Poker and scratch cards from the developer.

The brand was founded in 2006 and has received multiple awards since. It provides content to some of the industry leading brands and continues to grow from strength to strength.