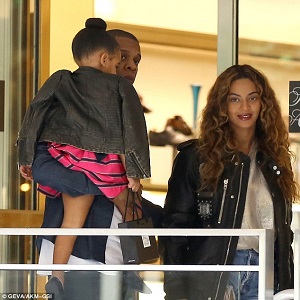 Eyebrows rose, and people weren’t sure if they should be charmed, or offended, when the six year old daughter of Jay-Z and Beyoncé, Blue Ivy, bid a staggering nineteen thousand United States Dollars at an auction. Everyone could agree that the little girl was indeed cute, but likewise had to question why a six year old was being given the freedom to throw around nineteen thousand dollars like it was confetti.

Never fear, though, because the child lost the bidding war to Tyler Perry, who upped the amount to twenty thousand dollars. The art piece in question, an acrylic painting of acclaimed actor Sidney Poitier, would be finding its place in the home of Mister Perry. But the question still remains; what were the two celebrities thinking letting their child make enormous bids on pieces of art?

How Much Is Too Much?

Think about what the average weekly allowance should be of a six year old. Or, better yet, think about if a six year old should have any spending allowance at all. If the number nineteen thousand United States Dollars crossed your mind, you’ve probably recently scooped a jackpot win at an online casino, or picked all the winning lottery numbers correctly.

Jay-Z and Beyoncé didn’t make any comments about the incident, but fans sure did on Twitter. One fan made the joking comment that the money probably didn’t represent a fifth of the child’s allowance. It’s enough to make you throw back your head and laugh, until you really think about it, and wonder what exactly Blue Ivy is allowed to spend. Enough to make some roll their eyes and scoff.

Perhaps the whole thing was just a silly publicity stunt, aimed at keeping the names of Jay-Z and Beyoncé in the headlines?

All In Good Fun

Though, taking a closer look at the happening, it seems to have all been in good fun. The other guests at the Wearable Art Gala, where the incident took place, were all very quick to have a laugh when Blue Ivy made the bid. And, upon the child raising her paddle a second time, to confirm the bid, Jay-Z even jokingly tried to pull her arm down. Beyoncé had a good laugh about this, perhaps confirming that they had simply let the child bid on their behalf, and made a game out of it.

Jay-Z and Beyoncé have two other children, Sir and Rumi, although there is no word yet as to whether the other two are likewise art fanatics. Perhaps between the three of them they can gather up a decent art collection, and retire on the resell value!