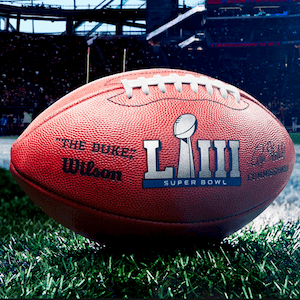 There will be no Bay Street winner of this year’s high-stakes Super Bowl sweepstakes, except for the thief who made off with the $500000 pot. No details have been confirmed, but it is believed that organizers home was broken into and the full pot swiped.

The Bay Street Super Bowl sweepstakes have been running for longer than anyone can remember. Exclusively for the elite of Toronto’s financial district, the pot buy-in is $5000. The organizer can be seen making his way from office building to office building collecting player’s stakes.

Known as Super Bowl squares, each participant receives 100 potential final scores and the person with the final score wins $300,000. A correct halftime score pays $100,000 and winning the 1st or 3rd quarter has a prize pool of $50,000.

This year, however, the exclusive clubs pot has been nicked and the winner can expect to receive his funds over a period of four years, through a payment plan from the organizer.

The unnamed organizer has thanked everyone for their understanding and promised to make changes to collections for the next sweepstakes.

No Case of Theft Reported

Despite the size of the loss no theft has been reported in either Toronto or its neighbouring areas. Some believe that this may be due to an email that was circulated in which there was the mention of fees.  High-stakes gambling is illegal in Toronto, and if the trader was receiving a cut of the pool this would qualify.

Due to the organizer making payment arrangements to ensure the funds are returned he is not under any suspicion of theft.

Super Bowl sweepstakes are common in Canada, where sports betting is still under review and quite complicated at present. Sweepstakes are not considered gambling but rather a betting pool where all the funds are distributed to the winners. Organizers are not allowed to keep any part of the funds that would then constitute gambling.

Super Bowl LIII brought in approximately $6 billion in bets, according to the American Gaming Association (AGA). Unfortunately, the AGA estimates that about 95% of this amount was bet illegally. This accumulated amount was from the 22 million adults that planned to bet on the Super Bowl.

It is a widespread opinion that Canada is lagging in the sports betting industry and losing a vast amount of money to illegal operators. When it eventually regulates the industry, it will be playing catch up with the US providers.