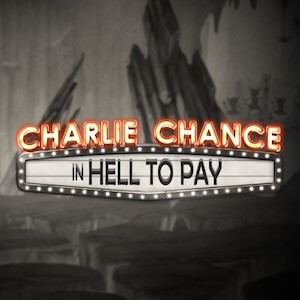 Play’n GO’s Charlie Chance in Hell to Pay may be a brand-new slot hot off the production line, but it’s meant to invoke a true sense of classic reel spinning nostalgia in players. Remembering old-style Vegas is the name of the game this time round and its quite obvious right from the get-go that the slot was created for a more “traditional” audience of players.

But old-school doesn’t mean boring or stingy on the wins, and Play’n GO’s retro Popeye-style animated Charlie Chance in Hell to Pay is everything but common-day or boring. The game comes kitted out standard with various chances to win really big and along with its amped-up rewards system, it ignites yet again in the player a love of classic animations in the style of Popeye and Tom ‘n Jerry.

In fact, the majority of the objects in the slot have obviously been influenced by the likes of Max Fleisher’s Popeye, Betty Boop and other similar characters. And it’s the animations that tend to stick around in the minds of players as these often form the benchmark as to whether or not a player returns to a specific developer’s content. Since many players don’t pay much attention to the names of developers as opposed to those of operators, many often wrongly assume that these are separate but combined entity. And so, without realising this on a conscious level, players tend to pass the developer and the operator right along under the same measuring stick. Returning to a specific game more often than not means returning to a specific operator and developer.

In Charlie Chance in Hell to Pay symbols are presented in classic-fruit retro casino style and the slot boasts an entire range of special bonus features and symbols. This of course intensifies that old classic casino experience feel.

It stands to reason that Charlie Chance in Hell to Pay seeks to bring old players and new players together under a combined umbrella. The game may be simple, says Play’n GO Chief Executive Officer Johan Tornqvist, but as the old saying goes, “less is definitely more”. This truth and adage applies prominently to the iGaming industry worldwide.

Play’n GO seems to at present been keenly interested in revamping and reliving all the old classics, an example being the re-release of Agent Destiny toward the beginning of the month. Hopefully even more slots in the same style are set to follow!