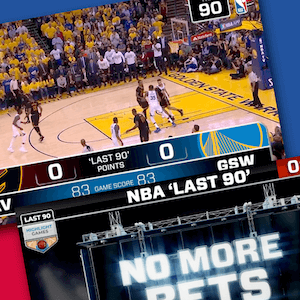 After the Raptors recent win, the NBA is even more popular in Canada than ever before. So, the news that the National Basketball Association is set to release a virtual game titled NBA Last 90 is more than welcome. Due out in both the United States and European regulated gambling markets, the unique take on sports betting is set to potentially change the gambling industry.

ESPN described the game in a press release, explaining that it involves dropping the player into the last 90 seconds of a simulated Basketball match. But although the event is imitation, the teams playing are based on those that exist in real leagues. Even the digital players are based on their real world counterparts, right down to having similar likenesses. But most important is that all bets made are for real money, with direct payouts made to players upon a successful wager.

Wagering On An Outcome

The wagering options will include such things as which team wins, which team scores first, or what the total points will be on the final buzzer. Though it is essential to note though that the outcomes are decided by a random number generator (RNG.) In this regard the system is more akin to reels on a slot than an actual Basketball match.

NBA Head Of Fantasy And Gaming Scott Kaufman-Ross spoke about the release of the game. He explained that one of the key reasons for creating the title was to offer European fans alternative wagering options. Due to time zone differences, Basketball fans in Europe often do not get the opportunity to watch important events live, which means that they are unable to place bets during the action. The new virtual system will allow these fans to place bets, with complete convenience and without any concern for time zones.

Kaufman-Ross went on to state that he was surprised by how popular the virtual system had been with so far. In his opinion the unique avenue demonstrated a new way for the league to engage with dedicated fans, and give them more of what they wanted.

The Dawn Of Virtual Sports Betting

Many sites already offer betting on simulated events. Generated horse racing is a prime example, which allows players to place bets on a randomly generated digital recreation of a horse race. But NBA Last 90 is the first example of a major sports league venturing into this previously untested landscape.

If it proves successful, there is almost no doubt that other sports leagues will follow, and offer similar wagering options for fans. But, how drawn to this interesting take on sports betting fans will be, remains to be seen.