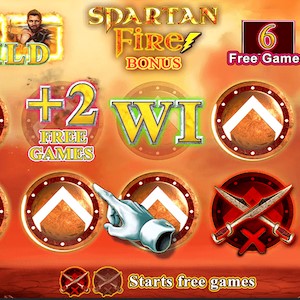 If ever the time was right to embrace fiery hot entertainment on the reels, then that time is now! And its all owing to the creative team of genius developers at award-winning iGaming studio Lightning Box and their new Spartan Fire online slot masterpiece.

Spartan Fire is the ultimate coming together of pure and riveting online gaming entertainment at its best, huge mega-money wins, edge-of-your-seat online slots action, and the most exciting gameplay the industry has seen to date. And best of all is that the latest Lightning Box game is themed around the legendary and revered Spartans.

It’s true: even after centuries gone by, the world remains fascinated by the Spartans. And if any developer can be expected to fully deliver on that fascination and expectation, then that developer would by Lightning Box.

Spartan Fire features an entire range of exciting online slots features. These include 9 free spins with a multiplier of up to 30x applied to all wins registered in the bonus game, a total of 40 paylines fashioned on a 4x5 set of reels, a bonus symbol, multipliers, and substituting wild symbols. And best of all is that it’s all wrapped up in a single adrenaline-pumping online gaming work of art.

The new title is powered by Scientific Games’ SG Digital Platform. Originally released for a 2-week period of exclusivity to Kindred players only, Spartan Fire is now live and available to all players signed up at licensed Lightning Box powered online and mobile casinos. And it’s according to Lightning Box CEO Peter Causley, a game sure to thrill and entertain players far and wide.

Spartan Fire’s symbols and backdrop are superbly themed after the mighty warriors of old, and the symbols perfectly reflect the raw and epic power of some of the greatest men who ever lived. Standard lower value symbols include playing cards numbers 9 and 10, and a Jack, Queen and King. Themed higher-paying symbols include the Spartan Fire soldier wild symbol, the Spartan ship of war, a pair of crossed fighter’s swords, the Spartan warrior, and also a mighty fleet of stunning Chariot Racers.

Slots players, not unlike their Spartan countrymen, are according to Causley, about to experience the thrills and spoils of war and victory. And what better way to celebrate all of that against a backdrop adorned in famous Spartans depicted in statuesque gold?