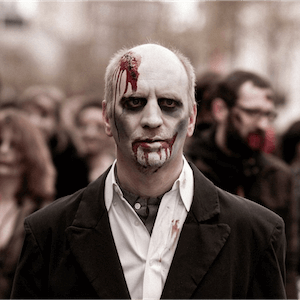 What better way to celebrate to celebrate All Hallows Eve than with a solid dash of adventure with the undead? Thanks to Relax Gaming’s second network slot release, Zombie Circus, this is exactly what we plan to be doing when everyone else is out trick or treating. The game’s premise is a dark and eerie upside-down world of those who have died but continue to roam the passageways of the living, and as far as Halloween is concerned, we’d be hard pressed to find any game more befitting to this time of the year.

Scatters, Wilds and free spins – it’s all there in this 5 reel, 10 payline game. Combined with a dash of what has grown into one of the best-loved themes over the course of the last decade, this new release is bound to be one for the books.

Relax Gaming’s Chief Product Officer, Simon Hammon, is obviously a firm believer in the living’s obsession with those who do not seem destined for neither life nor death. Hammon recently commented on the new release and said that the zombie idea was one that fascinated many people, and that to use the idea as the central theme for a slot game seemed a natural thing to do.

Hammon said that it was a top priority for the development team to deliver content that will captivate players, and that Zombie Circus certainly appeared to fall into this particular category.

Considering the massive success enjoyed by movie and television franchises who have explored the whole zombie theme in great detail, Hammon and the team seem to have hit the nail right on the head.

A Focus On Diversity

Zombie Circus is the second release in Relax Gaming’s newly launched slots portfolio. The first, Erik the Red, centred on a Viking adventure, is very different from Zombie Circus. According to the developer, the vast differences in game mechanics between the two slots are a clear indication of the levels of diversity that can be expected from the team in the future.

If high-quality content is the name of the game, then Relax Gaming has gone all out to show that they are here to play ball. We’re looking forward to reporting on more releases by this obviously capable team of developers.