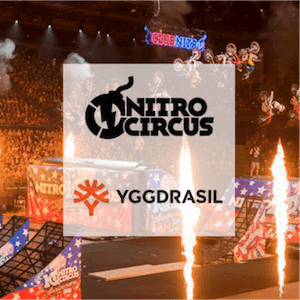 Cherry AB-owned Yggdrasil Gaming has shown itself to be a truly innovative developer in the iGaming industry, and its latest stunt serves to completely drive home that particular notion. The developer has embarked on a partnership with the world-famous Nitro Circus and recently showcased the very first branded game partnership with the entertainment company at the launch event in Malta.

Two of the biggest stars performing in Nitro Circus made an appearance at the event. World-famous BMX-riders Kurtis Down and Todd Meyn entertained more than 100 Yggdrasil clients at the launch event by performing the type of daredevil stunts that the Nitro Circus has become famous for.

The spectators were also treated to a barbeque prepared by Yggdrasil’s very own in-house chef, Ivan.

The developer’s Slot Shot tournaments have become increasingly more popular since having hit the gaming scene back in 2016. Yggdrasil now wants to expand on the growing success and popularity of the brand by inviting clients to a series of events that are tailor-designed to entertain and even thrill. The performance by the Nitro Circus was merely a taste of bigger things to come.

In between stunts performed by Down and Meyn, participants were invited to enjoy their very own Slot Shot tournament, during which they were treated to the brand’s special features and bonus rounds, and having great fun whilst competing against each other in a nail-biting BOOST Tournament.

Nitro Circus is world-renowned for being the biggest action sports entertainment brand out there. Co-founder and iconic action sports stuntman and dare-devil, Travis Pastrana, still heads up the brand. Nitro Circus will be touring Europe during November of this year and this time round, it will be in conjunction with the Yggdrasil game launch.

CMO at Yggdrasil Gaming, Karin Wahlstrom, said events like the Nitro Circus preview was a means of putting the company’s valued partners at the heart of top-class entertainment. She said that unforgettable events like this is what would ultimately give the developer’s clients a better idea of what was at the heart of the company’s culture. She also said that the Slot Shot Tournaments was the perfect vehicle in order to achieve this, and that the company was planning many more extraordinary events of this nature.